I need to build an engine house to have a place to store the train engine and keep it out of the weather.  Most trains that I’ve seen have a separate switch spur that allows the engine to roll into the house.  For now, I’m going to take a simpler approach and just build the engine house on top of the main loop of the track.  This way, I don’t have to add more track and build a switch.  Of course, this means that the engine house will need doors at both the track entrance and exit to allow the train to roll through.

I did get a few ideas, though.  By incorporating these into a design, this is sort of what I have in mind for my engine house:

I’m going to make it bigger than necessary for housing the engine.  That way I’ll have some storage capacity for parts and spares related to maintaining the railroad.

I initially was planning on a shed that was ten by twelve feet.  But the proximity of the track to some trees that I’m unwilling to cut means that the largest I can make it will be ten by ten.

To preserve a look of symmetry, I’ll have a real door over the track entrance and exit, and a faux door on the other side of the structure that won’t be functional.  And to keep it from looking too plain, I plan to have a “chicken coop” along the roof ridge.  I’m sure there’s an architectural term for this, but I don’t know what it is.  But I did see this feature in a number of the pictures of engine houses, so “I’ll have one of what she’s having!”.

Now that I have an idea of what the engine house will look like, it’s time to start.  First order of business is to make a list of the building materials and get that on order.  I took delivery of the material and set it in the garage for now.  I’ll move the pieces to the building site as needed so that they don’t sit in the weather and warp.  Here’s what the engine house looks like at the moment.  Note that it comes “Some Assembly Required”:

Selecting and Clearing the Site

The track oval sits on a slight grade.  I’m going to position the engine house at the high point of the track so that the track is at the same relative height (to the doors) on both the entrance and exit.  There are some small trees and brush that’ll need to be cleared away.  This is what the site looks like before and after clearing:

I could prepare a foundation involving grading and pouring a concrete foundation.  But I’m going to keep things simple (and cheap) by sitting the house on concrete cap blocks.  It won’t need to support much weight, and the house won’t be getting much traffic.  So the cap blocks should work just fine for my purposes.

I’ll position nine blocks, spaced at five foot intervals, to support the 10′ x 10′ engine house.  It’s critical that the top load-bearing surfaces of each of the blocks is exactly level with the other eight blocks.  If even one of the blocks is out of level, it will affect the levelness of the floor, which in turn will cause the framing to be out of square.  So I’m taking extra care to ensure that the foundation blocks are set properly.

Now that the foundation blocks are set, I can build the floor.  The shed is ten by ten feet, but I won’t be flooring the entire area.  The track will go through the shed, so I’ll be flooring only that portion of the interior where there’s no track.

Here is what the flooring looks like as it progresses:

Now that the foundation and floor is set, the framing can begin.  The walls comprise eight-foot studs to match the eight-foot size of the siding panels.  You can see in the gallery of photos the progression of the building, from the framing of the walls and roof to the installation of the siding and doors.  The roofing with asphalt architectural shingles completed the structure.

Click through the pictures in the gallery to see the progression of the completion of the engine house: 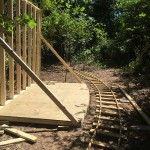 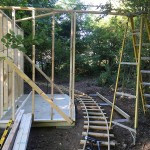 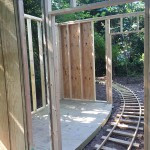 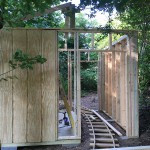 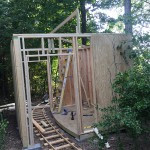 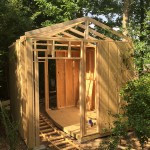 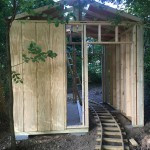 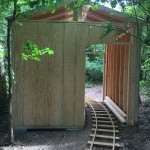 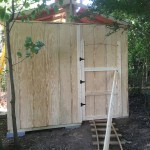 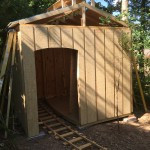 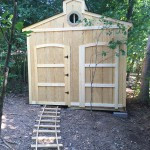